The Seine, the first French built and manned passenger steamer on the Newhaven - Dieppe route took up service in the summer of 1891. Built by the Forges et Chantiers de la Méditerranée at Le Havre, the Seine was initally considered to be a vast improvement over the two British built and manned paddle steamers on the route, the Rouen and the Paris. Burning less coal than the paddlers she was also faster, being able to make the crossing in about 3hr 15min.

Large cowls fitted to the tops of her funnels gave her a somewhat odd appearance. She was nethertheless advanced for her day with watertube boilers powering triple expansion engines giving her a service speed of just over 19 kts. However, design choices by her somewhat inexperienced builder hindered her throughout her service life. In order to achive a high service speed she was given a relativly narrow beam which gave her a tendance to roll, and a lightweight constuction which wasn't quite sufficient for the rigors of Channel operations.

In 1989 after just 8 years of service the Seine was transferred to the reserve and put up for sale. No buyer came forward and after a brief reserection to help cover the traffic generated by the Paris Exhibition of 1900 she was laid up in 1901 and finally went for scrap in 1906. 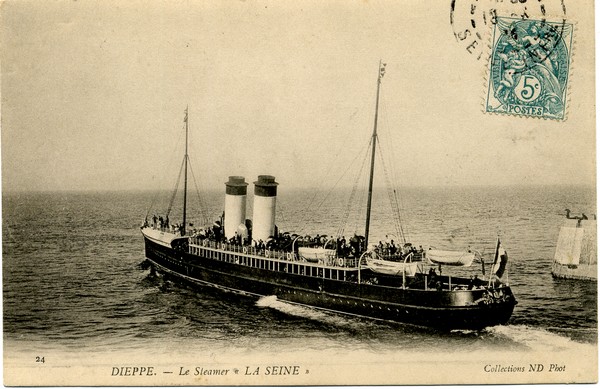 Postcards of the Seine are few; being laid up 1901 she rarely caught the postcard photographer's eye. Here she is departing Dieppe. Note the white painted ventilator beside the after funnel.
0357 - A ND card no.24 postmarked 1904.
«   Previous ship     Next ship »