Built by Gourlay Brothers & Co.of Dundee in 1906 for the LSWR's Southampton - St. Malo service as a replacement for Hilda, tragically lost the year before, Princess Ena was the last channel steamer to be fitted with reciprocating engines and incidentally one of the last ships to be built by Gourleys who were wound up in 1908 after getting into financial difficulties. Princess Ena's two three cylinder triple expansion engines driving twin screws gave her a top speed of 19 knots allowing her to make the crossing to St. Malo in nine and a half hours.

Her service life before and after WW I was not without incident. In May 1908, en route for St. Malo in misty conditions, an abnormal tide set her against the Paternoster Rocks off Jersey. With her watertight doors closed she made for St. Helier where she was grounded for inspection and her passengers transferred to another vessel. Damage was slight; some buckled pates and started rivets. After being patched up she returned to Southampton for repairs.

Requisitioned by the Admiralty in April 1915 she was briefly used as a Q-ship before being appointed as a Fleet Messenger in the eastern Mediterranean in October 1915 were she took part in the Gallipoli Campaign. Released in 1920 she recommenced service with the LSWR.

In the early hours of August 1923 in fog Princess Ena grounded on the Minquiers Rocks about ten miles south of Jersey. As a precautionary measure the passengers were put into the lifeboats and recovered by Bertha, a LSWR cargo vessel who had arrived on the scene in response to Ena's distress calls. The passengers were taken on to St. Marlo by Bertha closely followed by Princess Ena who had floated off the rocks with the rising tide.

In August 1935, having disembarked her passengers at St.Helier Princess Ena departed empty to St. Marlo for that evening's Southampton sailing. She never arrived. About 9 miles south west of Jersey a fire broke out. The fire rapidly took hold; her Master, Captain P. Lewis, anchored the vessel and sent out a distress message. The GWR steamer St. Julien and the Jersey tug Duke of Normandy arrived on the scene and, when it became clear that the fire was out of control, took off her crew. In the early afternoon the next day, despite the fire-fighting efforts of a French tug, the Cherbourgeois, Princess Ena sank. 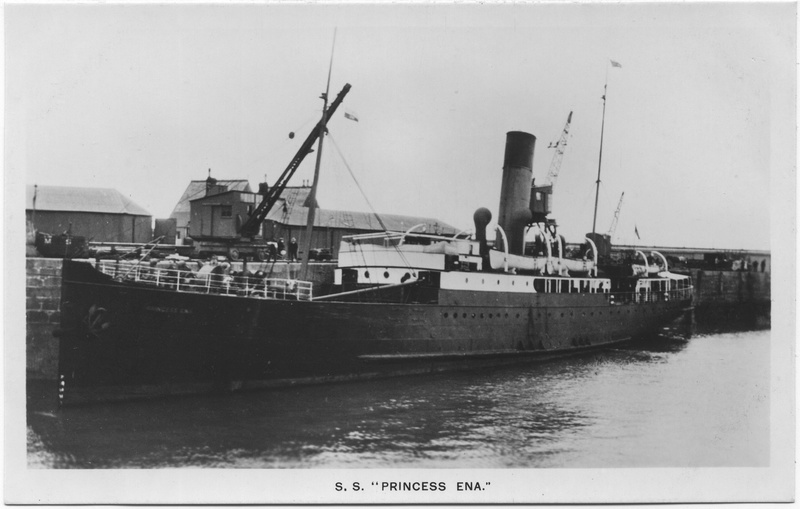 A rather poor picture of Princess Ena late in her career - bulwarks have replaced her promenade deck raiilings.
0370 - An unidentified and untravelled photograhic postcard.
«  Previous ship     Next ship »